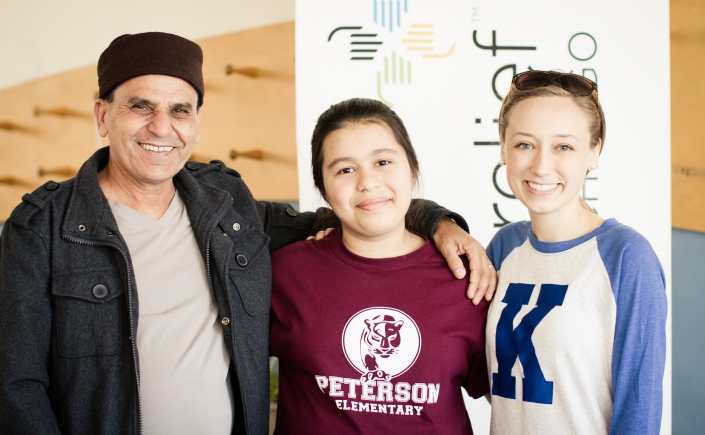 Are you interested in learning more about refugees? The resettlement process can be very confusing and time-consuming, so we sat down with Christy Hillebrand to answer some frequently asked questions. Christy is the Director of Refugee Resettlement here at World Relief Chicago and has been here for 1.5 years. She has served refugees in Wisconsin, Illinois, and Texas for over 5 years.

Christy: As Director of Refugee Resettlement at World Relief Chicago, I spend all day every day thinking about, talking with, and working for refugees starting a new life here in Chicago. I consider it a great privilege to get to make a small contribution to this cause each day with our team, and to get to know some of the families that have made the long journey to be resettled in our community.

Not everyone has the luxury to spend all day working on this like I do—I know that there are many of you who care deeply for refugees, but may not quite know where to start stay informed or get involved.  Even for me, it is difficult to keep up with all that comes out in the news, all the updates on the war in Syria or the struggle for the Rohingya in Myanmar, or many other conflicts around the world that are contributing to the highest number of refugees since World War II (over 65 million).

Today I want to answer some of these common questions, give you an idea of what the “issue” looks like on the ground for the refugees that have come through our doors over the last 30 years in Chicago, and along the way point you toward some resources that can lead you beyond the quick headlines for balanced information about refugees whenever you need a refresher or want to go deeper.

Question: Where are most refugees coming from?

Answer: I’ll start off by saying that it’s easy and common for people to confuse being a “refugee” with being an immigrant. Refugees are immigrants, but not all immigrants meet the definition of a refugee, which the UN defines as “…someone who has been forced to flee his or her country because of persecution, war, or violence. A refugee has a well-founded fear of persecution for reasons of race, religion, nationality, political opinion or membership in a particular social group. Most likely, they cannot return home or are afraid to do so.”

Because of that definition, most refugees we see in Chicago come from areas around the world that you hear are having great political or ethnic conflict as a group: Syria, Democratic Republic of Congo, Myanmar, Somalia, Sudan, Iraq, and Afghanistan. In addition, we work with a few clients that have more personal stories of persecution, like those who have been discriminated against for their gender identity or orientation, or who have been political dissidents, and those people can and do come from any country.

Q: What is the vetting process for refugees trying to come to the United States? How do we know it’s safe to bring them from these conflict zones?

A: Detailed information about the refugee resettlement process is provided by Refugee Council USA, as well as the Department of State.

Q: When a refugee arrives, what is their legal standing?

A: Being a refugee is often casually used to refer to a “situation” people find themselves in when they have to flee their home, but the term is also actually an international legal status that refugees have to prove with the United Nations in order to receive support.

The UN sets up an interview with each refugee wanting to receive this status, and each refugee has to prove they meet the definition in order to be registered and receive support abroad, and potentially be resettled  to a third country (which only 1% of the refugee population ever gets that chance).

When a refugee meets that UN criteria and actually gets approved to come to the United States (a vetting process that takes 2 years on average), the legal status listed on their documents from the day they step off the plane is “refugee.” This status affords them the legal right to work, live, and receive a limited amount of government assistance. This status also puts them on path to citizenship in the United States within 5 years should they comply with all the requirements.

Q: When someone is approved to enter the United States, who pays for them to come here?

A: The refugees themselves pay for their flight. The flight is purchased on their behalf by the International Organization for Migration, and the refugees pay back this “travel loan” for the cost of their flight little by little starting 6 months after they arrive.

Q: How quickly after their arrival can a refugee find a job? Are there numbers on what percentage of this population works? What types of jobs to do refugees typically have?

A: In general, and because we have a healthy job market in Chicago, most refugees get started working within the first 2-3 months in the United States. Most of these jobs are what we call a “survival job,” or one that just helps them pay the bills. In 2017, our average starting job wage was $11.25 and the most common types of jobs were in the service or manufacturing industries.

Refugees, just like you and I, come from a whole range of educational and career backgrounds. Some are coming to the US after living decades in a refugee camp with little education or English language ability, but others are highly educated with degrees in law or medicine, and hope to continue their career here. We work with both types of clients, first to try to help them get their bills paid with a survival job, but over the long term we also try to help them with their resume and give them some sense of what a career path might look like long-term.

World Relief Chicago is a refugee resettlement agency and provides immigration legal services to the Chicago community.  If you are interested in becoming a volunteer or learning more, visit our website. Our most urgent needs are for Health Advocates, Medical Appointment Transporters, and In-Home ESL tutors.